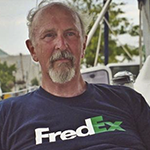 Fred Livezey is a graduate of the University of the Arts in Philadelphia with a Bachelor of Fine Arts degree in Graphic Design. As a Graphic Designer, Fred had many opportunities to utilize photography in the Graphics he produced for clients large and small.

Fred discovered 360 degree Panorama photography when he joined The Pixel Corps, organized by Alex Lindsay, formerly employed by Lucasfilm and Industrial Light and Magic. Alex created special effects on “Star Wars: Episode 1. The Pixel Corps was conceived as a modern day craftsmen’s guild. It provided training and employment opportunities in all aspects of video and special effects production.

While training in 3D software Fred became aware of and intrigued by 360 degree panoramas. They are used to create the most realistic environment for 3D models.

In addition to an interest in photography and design, Fred brews beer in a specially constructed basement brewery. He calls his beer Fredweiser Electrobrew.